Inflation making life difficult for the poor and vulnerable

Global price rises, devaluation of the Nepali rupee and artificial price hikes by traders pushing goods and services out of reach.

Upendra Shahi is breadwinner for his family of four, and he is finding it ever more difficult to feed them with costs of living spiralling out of control, and his income flatlining. 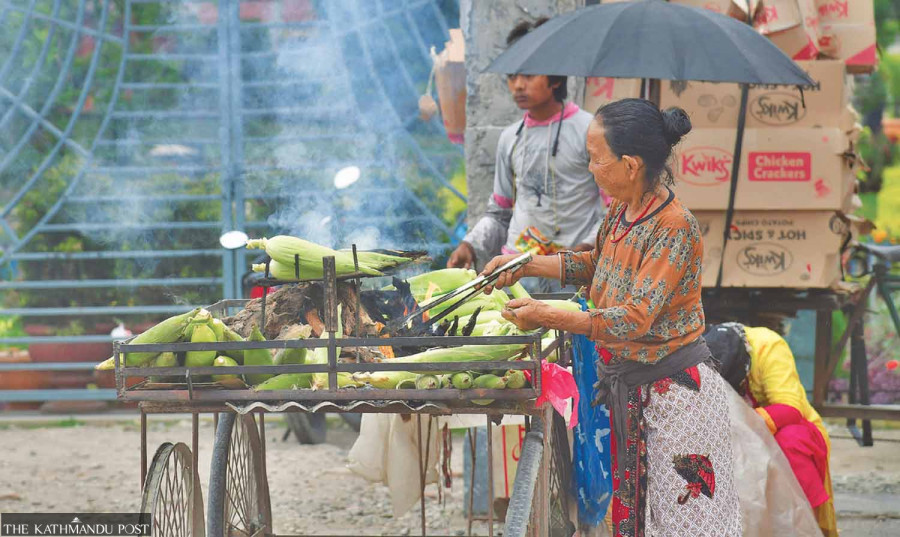 The 31-year-old rideshare driver is frugal when going to the market, and has been forced to cut spending even on food.

“Food prices have skyrocketed,” Shahi said. “Since meat and eggs have become very costly, we have cut back on them as the family needs the money to buy essentials.”

As a rideshare driver, he has to spend a lot of money on petrol. The price of petrol has soared from Rs115 to Rs170 per litre in the past year. “Due to the rising prices of everything, I haven't been able to save any money while I could set aside Rs5,000 per month until a year ago,” Shahi said.

Part-time teacher Tom Limbu is similarly hard-up. He has to spend a large part of his income on his commute.

“I have to spend more than Rs5,000 per month on transportation alone which used to be around Rs2,000 before the pandemic," said Limbu, who lives with his family in Kapan.

The new academic year begins in May, and he is worried about arranging money for his daughter’s admission to school. “I don’t know how much admission will cost, and how much I will have to spend to buy books, stationery and uniform,” he said.

Life is becoming harder for low-income Nepali families because of rising prices.

The last time the country’s inflation crossed 7.14 percent was in mid-September 2016, when it stood at 7.9 percent.

Inflation has been rising rapidly, but there has not been any significant rise in people’s salaries. In the previous fiscal year 2020-21, average annual inflation stood at 3.6 percent while average salary and wage rise stood at 2.76 percent, indicating that inflation is wiping out wage gains, according to the central bank.

If wages do not increase, inflation increases the cost of living for fixed wage earners.

“Let’s assume that a person having a fixed income earns Rs100 per day. An inflation rate of 8 percent means their real income is just Rs92 per day. This means that the cost of living increases for such people,” said economist Keshav Acharya.

According to him, rising inflation has hit low income people and daily wage earners hard, and has pushed many people in this category under the poverty line.

“Inflation is likely to rise further as the Ukraine war is not going to end any time soon,” said Acharya. “But there is a question about whether salary and wages will rise in line with inflation.”

High inflation is hammering people at a time when the country faced large-scale job losses due to Covid-19. Inflation has been rising rapidly, but there has not been any significant rise in people’s salaries. Post File Photo

According to the Nepal Development Update, a report of the World Bank released in early April, job recovery for those who were put out of work during the pandemic was low and accompanied by a decline in job quality and earnings.

Of those employed in January 2020, as many as 52 percent experienced a job or earnings loss during the first Covid-19 wave in 2020, the highest in the region. For those who recovered from a job loss, 45 percent also reported switching sectors and taking jobs with lower earnings and skill requirements.

“Labour market exposures to the Covid-19 crisis in Nepal were significant, and vulnerable households in Nepal face the risk of falling back into poverty,” the report says. “Inflation will increase the cost of basic needs, which will adversely impact the poor and vulnerable, although this may be partially mitigated by rising remittances.”

Economists see the possibility of a further rise in inflation as the Russia-Ukraine war is likely to continue for months, if not years. Fuel prices have skyrocketed because of the war. On Saturday, Nepal Oil Corporation increased the prices of petrol, diesel and kerosene by Rs10 per litre, effective from Sunday.

The government was also forced to make an upward revision in public transport fares due to the increased gasoline prices.

Last July, the Department of Transport Management allowed transport entrepreneurs to jack up bus fares on inter-provincial routes by a sharp 28 percent, and cargo carriers serving routes in the Tarai and hills were permitted to hike freight charges by 26 and 20 percent respectively.

In April this year, the department allowed transport operators to raise fares on inter-provincial routes by a further 10 percent. The department was permitted to hike freight charges by 13 and 15 percent for cargo carriers serving routes in the hills and the Tarai respectively.

“Petroleum prices are still rising, and its spillover effect will be reflected in the prices of consumer goods which need to be transported from one place to another,” said Acharya. “It will also increase the prices of services. For example, if the price of cooking gas rises, prices of foods at restaurants will rise.”

As a result of the Russia-Ukraine war, there has been a spike in the prices of everything—particularly energy, commodities and metals. International agencies have suggested the continuation of high prices of commodities in the international market in the next few years.

A World Bank report titled Commodity Market Outlook released on April 26 states that the war in Ukraine has dealt a major shock to commodity markets, altering global patterns of trade, production, and consumption in ways that will keep prices at historically high levels through the end of 2024.

Energy prices are expected to rise more than 50 percent in 2022 before easing in 2023 and 2024. Non-energy prices, including those of agriculture and metals, are projected to increase almost 20 percent in 2022 and will also moderate in the following years, according to the report.

“Nevertheless, commodity prices are expected to remain well above the most recent five-year average. In the event of a prolonged war, or additional sanctions on Russia, prices could be even higher and more volatile than currently projected,” the report says.

“As Nepal is an import-dependent country, inflation is likely to rise here because of the global rise in prices of petroleum products and other commodities,” said Prakash Kumar Shrestha, chief of the Economic Research Department at the central bank. “The Nepali rupee has also fallen against the US dollar which will further raise the prices of imports.”

On Sunday, the average exchange rate reached Rs124.23 per dollar, according to Nepal Rastra Bank.

Apart from non-agricultural goods, Nepal has been importing farm products on a large scale in recent years, and their prices have also been affected by global inflation.

According to Manik Lal Shrestha, former division head, statistics division, at the International Monetary Fund (IMF), the global price rise of commodities is responsible for increasing Nepal's import bill by around 20 percent since the beginning of the current fiscal year 2021-22.

Officials and experts say domestic factors like increased demand for goods and services because of the recovering economy after the Covid-19 pandemic and traders increasing prices of certain goods arbitrarily also fuelled inflation in the country, besides international price rises.

“There was already high demand as the country’s economy has been recovering from the disastrous pandemic,” said Shrestha. “The local elections fuelled demand further, which contributed to the rise in prices of goods and services.”

Furthermore, traders have also been increasing prices in their own ways. “As the Ukraine war began, traders raised the price of cooking oil,” said Acharya. “They may increase the price of wheat flour as India has stopped the export of wheat.”

But there have been few market inspections to control the artificial price rises. “Effective market inspection could help to calm prices to some extent,” said Madhav Timalsina, president of the Consumer Rights Investigation Forum. “As government employees have been mobilised for the local elections, it has been easy for opportunist traders to hike prices steeply.”

Submit your details below to receive Newsletters